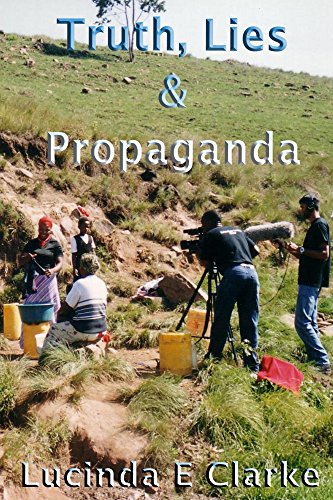 How do you become a writer and follow the dream you had since early childhood, when you need to earn a living? Well, it helps if you are fired from your teaching job, and then crash out at an audition for the South African Broadcasting Corporation.

Lucinda ‘fell’ into writing quite by chance, moving from radio to television, to eventually running her own video production company. Many of her adventures while filming are hilarious, and this book lifts the lid on what happens on the other side of the camera and shows the truth of working in the world of television and the media. If you read this book you will never believe anything you see on television ever again. It’s not as glamorous as people think, and Lucinda spent more time in toilets than she did in banqueting halls.

— Written with humour, honesty and from her heart, this is a must-read.
— An excellent read. A fascinating set of memoirs which are both informative and engaging.
— As usual Lucinda’s humorous, self-deprecating, easy style flows, carrying the reader along with her.
— Most of all, for me personally, what came across most forcefully was this author’s stamina, courage, good humour, perseverance and sheer hard work in facing all kinds of people and situations to emerge just as proud of her profession as a writer as she had ever been. Always so cool. So dignified. She is a shining example to all us writers.   John M W Smith, UK
— It is remarkable that she has managed to deliver such a comprehensive exopsé without resorting to vindictive outrage or to personal criticism of individuals in positions of influence or power. This adds to the believability of her account and makes what is already a fascinating read a very powerful account. Lucinda E. Clarke is a master wordsmith who never disappoints. She writes in a clear, easy to read style that carries her reader onwards. I have no hesitation in recommending this book to all with an interest in the media or in Africa.  Ian Mathie, Scotland